We know that every carer and every Caring role is different, ECC can help and support carers facing a variety of challenges and situations.

Simon is in his 60s and returned from Spain to care for his elderly mother when she was diagnosed with advanced dementia and Alzheimer’s disease and could no longer care for herself.

After 28 years of living away from the UK Simon rented a bungalow and moved his mother in with him.

He is now her full-time carer. This means he cooks, cleans and helps her with things like getting in and out of the bath.

“The thought of becoming a carer or retiring had never crossed my mind. I was busy working in the food and wine industry and enjoying it.”

Having lived out of the country for such a long time Simon initially found the care system difficult to navigate. It also meant that he hadn’t established the sense of community he would have done had he been living here for many years.

“I was really out of touch with how to get some help. It can also be a little isolating where we live.”

Simon says the saddest thing is having a conversation with his mother because she doesn’t remember things.

“Occasionally I show her old photos and talk to her about them. And she does enjoy and appreciate food, so that is one thing we can share.”

Simon is now receiving support from his local Carers Centre along with other local charities.

“This gives me access to funds which enables me to purchase respite care. This means I can get a break and go out.”

Simon’s local Citizens Advice has also helped him to get Carer’s Allowance which he was initially denied on the basis of having been away from the UK for a while. 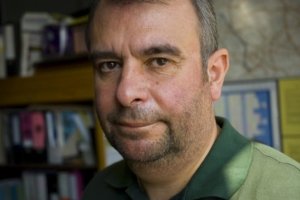 “The thought of becoming a carer or retiring had never crossed my mind. I was busy working in the food and wine industry and enjoying it.”

This site uses cookies. By continuing to browse the site, you are agreeing to our use of cookies.

We may request cookies to be set on your device. We use cookies to let us know when you visit our websites, how you interact with us, to enrich your user experience, and to customize your relationship with our website.

Click on the different category headings to find out more. You can also change some of your preferences. Note that blocking some types of cookies may impact your experience on our websites and the services we are able to offer.

These cookies are strictly necessary to provide you with services available through our website and to use some of its features.

Because these cookies are strictly necessary to deliver the website, refuseing them will have impact how our site functions. You always can block or delete cookies by changing your browser settings and force blocking all cookies on this website. But this will always prompt you to accept/refuse cookies when revisiting our site.

We fully respect if you want to refuse cookies but to avoid asking you again and again kindly allow us to store a cookie for that. You are free to opt out any time or opt in for other cookies to get a better experience. If you refuse cookies we will remove all set cookies in our domain.

We provide you with a list of stored cookies on your computer in our domain so you can check what we stored. Due to security reasons we are not able to show or modify cookies from other domains. You can check these in your browser security settings.

We also use different external services like Google Webfonts, Google Maps, and external Video providers. Since these providers may collect personal data like your IP address we allow you to block them here. Please be aware that this might heavily reduce the functionality and appearance of our site. Changes will take effect once you reload the page.